“Books, Not Bullets,” Is Malala Yousafzai’s Message to World Leaders - Discover More about Her Fearless Journey at The Children’s Museum of Indianapolis

Malala Yousafzai nearly died after being shot on her way to school just because she spoke out against terrorism and fought for an education. The first ever permanent exhibit in the world about the youngest winner of the Nobel Peace Prize will help children understand they have the power to make a difference regardless of their age. Visitors to The Children's Museum of Indianapolis will soon learn more about her in an exhibit called The Power of Children. Malala’s message (of giving everyone opportunity and of working to build a better world through education and communication) is universal and transcends religion or politics. 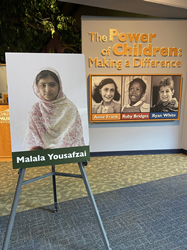 Malala’s courage to fight for her beliefs can help young people understand they don’t have to succumb to racism, discrimination or bullying. They each have a voice and the power to make a positive difference in the world.

The story of Malala Yousafzai’s journey will soon be a permanent fixture at the world’s largest children’s museum.

When a member of the Taliban shot Malala Yousafzai in the head on her way home from school, they had no idea what would happen. The 15-year-old Pakistani girl made a miraculous recovery, continued to fight for girls education and became the youngest ever Nobel Peace Prize recipient. Her battle for education and refusal to be stopped will now be featured alongside the stories of Anne Frank (1940s—child of the Holocaust), Ruby Bridges (1960s—one of the first to integrate schools in the American South) and Ryan White (1980s—AIDS activist) at The Children’s Museum of Indianapolis in an exhibit called, The Power of Children. The exhibit highlights stories of courage, perseverance and tolerance. The most amazing part is that these are all accomplishments made by ordinary children who faced extraordinary hatred.

Malala knows all about hatred; it surrounded her from the time she started blogging about living under Taliban rule as a child. Speaking out for girls’ education made her a target. In October 2012, a masked gunman boarded Malala’s school bus and shot her in the head; he also shot two of her schoolmates. Instead of silencing Malala, her voice became louder. She cofounded Malala Fund, a nonprofit dedicated to building a world where every girl can choose her future. When she was 17 years old, she became the youngest person ever to be awarded the Nobel Peace Prize because of her extraordinary efforts to make education a reality for every child. The Children’s Museum feels that her courage can provide inspiration to visitors young and old.

“Our goal is to provide a safe environment for families to have critical conversations about real world issues,” said Dr. Jeffrey H. Patchen, president and CEO, The Children’s Museum of Indianapolis. “Malala’s courage to fight for her beliefs can help young people understand they don’t have to succumb to racism, discrimination or bullying. They each have a voice and the power to make a positive difference in the world.”
The Power of Children exhibit will feature the story of Malala Yousafzai’s life, the challenges she faced as she attempted to get an education, and the positive impact she has had around the world. The museum will re-create her home in the Swat Valley and present information about her life, showing how she used the family computer to express her message. Overall, the exhibit will feature her legacy and also showcase other girls who stood up for the right to attend school.

“Malala embodies the true spirit and resilience of the valiant people of Pakistan. Her bravery and courage in the face of adversity has inspired millions around the world to stand up for the cause of education,” said Dr. Asad Majeed Khan, Ambassador of Pakistan to the United States. “Today, Malala is a role model for the world’s youth. While we pay tribute to Malala, I want to share that girls in Pakistan are emerging successfully across all walks of life. The Government of Pakistan remains committed to the social and economic empowerment of girls.”

“We each play a part every day through the kindness we show others and the actions we take. Please join us to Celebrate The Power of Children: A Year of Action,” said Patchen. Jan. 27 is the 75th anniversary of the Liberation of Auschwitz. April 8 is the 30th anniversary of Ryan White’s death. July 12th is Malala’s birthday, which the United Nations designated “Malala Day” in 2014. Nov. 15 is the 60th anniversary of Ruby Bridges integrating William Frantz Elementary School in New Orleans.

You can watch video from the press conference and listen to interviews about what will comprise the new exhibit here. You may see more photos of Malala Yousafzai on the Malala Fund media page.

Follow us on social media (Facebook. Twitter @TCMIndy and Instagram - #TakeActionTCM) on Monday of each week to find out ways you can bring waves of change to your community for Celebrating The Power of Children: A Year of Action. The Malala portion of The Power of Children exhibit is slated to open in 2021.

The Power of Children exhibit is made possible by lead gifts from Deborah Simon, Efroymson Family Fund, Chase, National Endowment for the Humanities, Duke Energy Foundation, Mr. and Mrs. Jerome P. Martin, U.S. Institute of Museum and Library Services, The Cummins Foundation, and The Anne Frank House in Amsterdam. Support for the addition of Malala Yousafzai's story is provided by Allen Whitehill Clowes Charitable Foundation, Inc., and U.S. Institute of Museum and Library Services. The Children’s Museum of Indianapolis is proud to partner with Riley Children’s at Indiana University Health, Old National Bank and Ice Miller LLP.

Malala is newest representative of Power of ChildrenThe world's largest children's museum is committed to promoting tolerance and acceptance.

Malala represents the power of children around the worldMalala Yousafzai will soon have a permanent exhibit that features her life and advocacy.

Malala, the inspirationMalala Yousafzai inspires girls around the world to get an education.