African Americans have played a major role in the growth of the Tennessee River Valley region. Museums stand today to honor and celebrate their achievements. 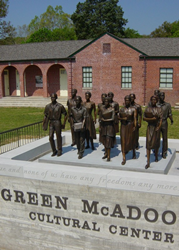 The Green McAdoo Cultural Center and Museum tells the story of the 1956 desegregation of Clinton High School.

On Sept. 22, 1862, President Abraham Lincoln issued a preliminary Emancipation Proclamation warning that in all states still in rebellion on January 1, 1863, he would declare their slaves free. The historic event was an important point in the Civil War and the beginning of the United States' transformation into the land of the free.

Many African American heroes, who made their mark on the world, called the Tennessee River Valley home. The African American people of the Valley have been major contributors to the history, heritage and culture of the land, and have shown uncommon courage in most remarkable ways. Today, museums stand in their honor to showcase objects and materials of importance in their lives and to present them to the public for the purpose of education and enjoyment.

August 26, 2019 marked the 50th anniversary of the walk down a hill to attend public schools by the Clinton Twelve. The museum tells the compelling story of twelve high school students, who in 1956, braved threats of violence to attend Clinton High School, making it the first desegregated public high school in the South and the first integrated school in the South to graduate a student of color after the historic Brown vs. Board of Education landmark decision. The Green McAdoo Cultural Center and Museum follows the chronologically detailed story of the 1956 desegregation of Clinton High School in life-size pictures with dramatic narrative.

The Jesse Owens Memorial Park, located in Oakville, Ala., honors the life and accomplishments of the Olympic sprinter and gold medalist. Born in 1913 in Oakville, Ala., Jesse Owens captured four gold medals at the 1936 Olympics in Berlin where Adolf Hitler famously refused to congratulate him. The first American to win four gold medals in track and field, he is honored in his hometown with a statue, museum, home replica, a 1936 torch replica and a long jump pit to tests one’s ability in reaching his gold medal distance of 26 feet 5 5/16 inches. In 1955, he was named Ambassador of Sports by President Eisenhower and toured the world promoting the virtues of amateur programs. He served as Eisenhower’s personal representative to the 1956 Olympic games in Melbourne, Australia. In 1970, he was inducted into the Alabama Sports Hall of Fame, presented the Medal of Freedom by President Gerald Ford in 1976 and received the Living Legend Award in 1979 from President Jimmy Carter.

In honor of the author of the 1976 book Roots: The Saga of an American Family, Alex Haley Heritage Square sits on the slopes of Morningside Park in Knoxville, Tenn., with views of the city, downtown business district and the Smoky Mountains. Within the Alex Haley Heritage Square, there are play structures, a paved loop and a peaceful green space with benches. The focal point of the community-built playground is the stunning 13-foot high bronze statue of the author and Pulitzer Prize winner.

Throughout history, music seemed to be the one channel in bridging the disparities of race. Noted musicians calling the Tennessee River Valley home are W. C. Handy, Bessie Smith and Howard “Louie Bluie” Armstrong.

Father of the Blues W.C. Handy was born in a small log cabin in Florence on November 16, 1873. He presented to the world the sounds of rhythm-and-blues, jazz, and soul with famous tunes such as “St. Louis Blues,” Memphis Blues,” and “Beale Street Blues”. The museum houses a collection of memorabilia, musical instruments, personal papers and original sheet music. Handy's famous trumpet and his personal piano are just a few of the items on display.

Crowned as Empress of the Blues, Bessie Smith earned the honor as the greatest classic blues singer of the 1920s. The museum’s original goal was to present the many contributions African Americans made to the development of Chattanooga. In 1996, a newly renovated facility became the new home of the Chattanooga African American Museum and the Bessie Smith Hall and included a world-class performance hall within the complex. The Bessie Smith Performance Hall has become well known in the Chattanooga community as an educational institution and spectacular venue to host performances, banquets, meetings and various community events.

The Louie Bluie Festival is named in honor of Howard "Louie Bluie" Armstrong, a LaFollette native and internationally acclaimed string band musician who grew up in LaFollette in the 1920s and became one of the nation's finest string band musicians, as well as artist, storyteller, and writer. Growing up, “Louie Bluie” was influenced by the genres of music that early settlers brought to Appalachia. He learned to play a fiddle at an early age and would go on to become one of the nation's finest black string band musicians, receiving a NEA’s National Heritage Fellowship. The free festival is set for September 28, 2019, in Cove Lake State Park in Caryville, Tenn.

For more information or to discover additional things to see and experience in the Tennessee River Valley Mapguide, visit http://www.exploreTRV.com. All listings have been nominated by local people who know the region best and offer visitors the most unique, fun and interesting experiences.