Former Sacramento tax attorney Roni Lynn Deutch faced 1,609 criminal contempt acts, 22 years of prison time, and $34 million in fines following contempt-of-court charges levied against her in 2011 by the State of California. Criminal defense attorney Ken Rosenfeld of The Rosenfeld Law Firm was instrumental in securing a historic settlement that substantially reduced all charges against his client. 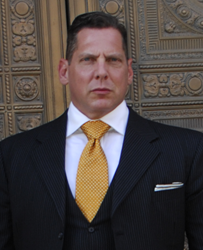 I would be rotting in jail somewhere for crimes I never committed. Ken Rosenfeld saved my freedom. He saved my life.

After a five-year legal battle between the State of California and former tax attorney Roni Lynn Deutch, the $34 million lawsuit has come to an end.

California criminal lawyer Ken Rosenfeld of The Rosenfeld Law Firm called the dropping of criminal charges “significant” for his client.

“This was devastating for her” said Rosenfeld.

Rosenfeld’s defense rested on the matter of Deutch’s popularity and the subsequent, and substantial, spike in his client’s business. Court records show he argued that, although her efforts were well intentioned, in the end Deutch simply became overwhelmed by the volume of cases her firm was managing.

“She never intended to hurt anyone,” said Rosenfeld. “Her heart was in the right place. Things just got out of hand.”

“Finally, this resolves the matter and lets her get on with her life. She can start a new chapter,” Rosenfeld said.

Deutch claimed that, without Rosenfeld’s help, “I would be rotting in jail somewhere. He saved my freedom. He saved my life.”

About The Rosenfeld Law Firm

Misdemeanor or Felony
When it comes to California criminal defense, The Rosenfeld Law Firm raises the bar. Mr. Rosenfeld aggressively fights on its clients’ behalf until the most beneficial outcome has been achieved. Whether clients are seeking a criminal defense lawyer for lighter crimes such as a California misdemeanor or a more serious criminal act such as a California felony, Attorney Ken Rosenfeld treats each case with the same degree of intent and professionalism.

The firm’s law offices are located in Sacramento and San Jose; however, Attorney Ken Rosenfeld handles cases all over California including the Bay Area, Silicon Valley, Northern California, and beyond: