“Green Titanic” is the shocking third and final part, in a series of reports by Robert Lyman, assessing the political and financial power of Canada’s environmental charities, says Friends of Science. Canadian taxpayers are unaware of the impending unfettered political power unleashed by recent changes to the charities section of the Income Tax Act. 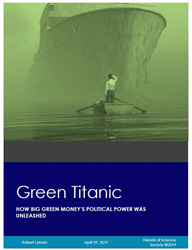 The environmental organizations opposing development have enormous and probably permanent funding advantages, far greater than any political party could match. The long-term economic effects .. could be especially damaging for the resource sector

“Green Titanic: How Big Green Money’s Political Power Was Unleashed” describes how recent changes in the Income Tax Act and regulations governing charities and a recent court decision have freed activist environmental organizations with charity status from previous constraints on their ability to conduct and fund political activities.

In “Green Titanic,” Lyman reports that federal and provincial governments in Canada now provide $170 billion per year in grants and contributions to registered charities.

Charities then raise an additional $80 billion per year based on private contributions, some of which are stimulated by their registered charity status; the cost to the federal treasury alone of this is $5 billion per year; the cost to provincial government treasuries is unknown.

Lyman points out the consequences for jobs and the economy, writing: “The impact on the alignment of forces supporting and opposing resource development in Canada could be profound. The environmental organizations opposing development have enormous and probably permanent funding advantages, far greater than any political party could match. The long-term economic effects of this funding advantage could be especially damaging for provinces and regions whose prosperity depends on resource-based development.”

The report goes on to say that “As a result of legislative changes and a court decision, registered charity status now gives an organization, including activist environmental organizations, the freedom to spend up to 100% of its revenues on political activities, so long as these are consistent with its "charity" objectives.”

In the report, Lyman expresses the concern that “these developments open the door wide to potential abuses of political spending by radical ENGOs and other organizations that want to get heavily into political funding and can afford to do so.”

Previous reports in this series are “Dark Green Money: A Glimpse Inside the Big Green Funding Machine” issued Jan. 10, 2019 which examined foreign and government funding to ENGO charities and “Big Green Money vs Conventional Energy Advocates: Foreign-funding for “No” vs “Pro” Conventional Energy in Canada” issued Feb. 12, 2019.

Friends of Science Society also issued a rebuttal to enviro-charity West Coast Environmental Law (WCEL) on Feb. 4, 2019, entitled “Manufacturing a Climate Crisis,” documenting the role of WCEL in establishing a West Coast tanker ban, with all its detrimental effects on the Canadian economy.

Some Canadian environmental charities have focused on climate change and the alleged effect of greenhouse gas emissions on global warming as a reason to block pipelines and overturn the existing National Energy Board process. Dr. Willie Soon presented clear evidence in his April 10, 2019 presentation at Friends of Science "Polar Bears and Solar Flares" event in Calgary, that the sun is the main driver of climate change in Canada and the world. Event page: https://friendsofscience.org/index.php?id=2446