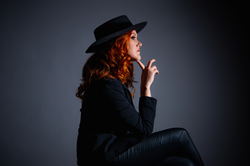 Grace Pettis is an award-winning songwriter from Austin, Texas who is a noted member of the South Austin scene. A little bit folk, a little bit country/Americana and with a whole lot of soul, Pettis has released two DIY albums and the Dallas Morning News has hailed her as "one of the most talented young singer-songwriters in America."

Pettis first came to the attention of MPress founder and President Rachael Sage at a SXSW party in Austin, where her voice and presence, even totally unplugged in a crowded room, commanded the spotlight. Sage gushes, "Grace Pettis is one of the best singers I have ever had the pleasure to hear. And when I say 'best', I don't mean that in a showy way -– although her voice is both powerful and beautiful. I mean that she can tell a story with her voice in a way that cuts right to the heart of our collective humanity, whatever the topic may be. Her songwriting is nothing short of masterful, and to see these timeless qualities in someone so young feels like discovering something akin to the magic of Loretta Lynn, Johnny Cash or perhaps, Brandi Carlile. MPress Records is thrilled to be working with Grace!"

Pettis, who is repped by Chas Management, will be touring the southeastern US and Europe in winter/spring 2020. Her first release on MPress is expected later on in the year. In the meantime, she is eager to have found such a supportive new team. "Signing a record deal sounds pretty daunting," Pettis admits. "It's not a decision to take lightly. But from the first conversation with Rachael Sage and her wonderful team, I've felt like I've finally found my way home. After a decade of releasing my own music, I couldn't be more thrilled to announce that I'm partnering with MPress Records, a label that has built its unique reputation on championing and supporting artists and putting music with integrity out into the world. I'm so proud to be a part of the MPress family."

ABOUT GRACE PETTIS: As a card-carrying member of the south Austin scene, Grace Pettis has amassed bragging rights to spare. She is the winner of many of the nation’s most prestigious songwriting contests, including NPR's Mountain Stage NewSong Contest, and has received grants from the Buddy Holly Educational Foundation. Grace’s songs have been recorded by other esteemed artists, including Sara Hickman and Ruthie Foster and she added to her songwriting accomplishments in 2019 by signing a publishing deal with BMG. Catch her with her band at an Austin club, headlining a festival with her trio Nobody's Girl, or on her own, trying out new songs in a little gem of a listening room, somewhere in America. For more information, visit gracepettis.com.

ABOUT MPRESS RECORDS: MPress Records was founded 20 years ago in New York City by award-winning multi-instrumentalist and producer Rachael Sage. The label has since released 13 albums by Sage, as well as albums by Seth Glier, A Fragile Tomorrow, Melissa Ferrick, and K's Choice, and the five-volume charity compilation series "New Arrivals". MPress has also produced showcase events at SXSW, CMJ, Midem, and Folk Alliance International. MPress is distributed worldwide by Caroline/Universal via SRG-ILS Group, and also via Sound Republica in South Korea. For more information, visit mpressrecords.com.