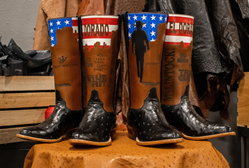 Justin Boots and John Wayne have proudly partnered to auction custom his-and-hers John Wayne cowboy boots during the National Finals Rodeo in Las Vegas, Nev. The auction begins on Thursday, December 1 and ends on Saturday, December 10. All proceeds will be split evenly between the John Wayne Cancer Foundation and the Justin Cowboy Crisis Fund.

John Wayne wasn’t just an actor - he was a legend and an icon. During his lifetime, John Wayne appeared in nearly 250 movies and was one of the most popular film actors of the 20th century, portraying heroes in western classics. He was an important figure on the American landscape with a series of starring roles in major Westerns and War pictures during the Hollywood Golden Age. These custom his-and-hers cowboy boots pay tribute to John Wayne’s American values and iconic roles in American Westerns.

This special auction is now open for bidding. The starting bid for each pair of boots is $2,500. The auction will close at 11:59 PST on Saturday, December 11.

About Justin Boots
Justin Boot Company has been handcrafting western footwear in the U.S. since 1879 when founder H.J. Justin mastered the craft of boot-making using only the finest leathers and quality materials for superior craftsmanship. The Standard of the West since 1879, Justin Boots remains committed to providing dependable footwear at a value, along with a prominent focus on handcrafting boots in the U.S. with global parts. For more information, visit justinboots.com.
Facebook: @JustinBoots | Twitter: @JustinBoots | Instagram: @JustinBoots_