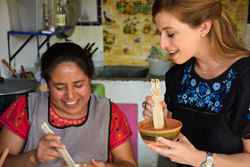 It has been incredibly exciting to watch Pati share her love of Mexico through the eyes of her family as they travel through her native country.

Each season follows Mexico City native Jinich as she tastes her way through a region of Mexico to gather inspiration for the accessible Mexican recipes she creates in her home kitchen in Washington, D.C. Part travelogue, part cooking in her home kitchen, the new season takes her to Oaxaca, one of the states that has contributed the most to Mexico’s gastronomy, art and culture.

“I could do 100 seasons on Oaxaca,” said Jinich. “It is one of the most complex and fascinating places in Mexico, with a myriad of mini cultures and their regional cuisines contained within Oaxaca itself. It is a mind-blowing, never-ending source of fascination and inspiration. I can’t wait to take our viewers there.”

Jinich ventures into parts of Oaxaca not found in guidebooks, such as the town of Tlaxiaco in the unexplored Mixtec region, to share unique and spontaneous experiences. She also gets to know the people behind Oaxaca’s legendary cuisine, from meeting Mexico’s Top Chef winner in his modern restaurant, to visiting bakers in a remote town, and intimate family meals with renowned chefs.

“It has been incredibly exciting to watch Pati share her love of Mexico with all of our viewers through the eyes of her family as they travel through her native country,” said Karen Fritz, vice president of program development and syndication at WETA Washington, D.C. “Her recipes are fun and easy to create.”

The experiences out in the field tie into the cooking segments in Jinich’s kitchen, where she guides viewers through her own interpretations of the Oaxacan dishes that often mesh with daily life in her household. Episodes explore themes that range from breaking down the most complex Oaxacan dishes, such as moles, to showcasing how to repurpose an ingredient in multiple ways.

“Pati is the most creative woman in lifestyle show biz today. She is continually expanding on her cooking magic,” said Dalton Delan, executive vice president and chief programming officer of WETA.

The 13-episode season was directed by Dan Connell who, alongside Jinich, helped the series earn multiple Emmy and James Beard award nominations for past seasons, including for “Best Culinary Program” and for “Outstanding TV Host,” as well as an Imagen Award for “Best National Informational Program.” Last year’s season five reached 13.3 million viewers and had 95% carriage in U.S. households in the first run.

“I have been directing Pati’s show for over four years, and I still learn something new every day with her,” said Connell. “The passion, creativity and energy that Pati brings to her show is unmatched by anyone I’ve ever worked with. It’s an absolute joy to watch how excited she gets to share new stories and experiences both with her viewers and our production crew.”

Those who missed past seasons of “Pati’s Mexican Table” can now watch on-demand through Amazon Video.

About Pati Jinich:
Born and raised in Mexico City, Pati Jinich is the host of the Imagen Award winning and Emmy, James Beard and IACP nominated PBS television series “Pati’s Mexican Table” now on its sixth season. She is resident chef of the Mexican Cultural Institute in Washington D.C. and author of two cookbooks, “Pati’s Mexican Table: The Secrets of Real Mexican Home Cooking” and “Mexican Today: New and Rediscovered Recipes for the Contemporary Kitchen.” Pati is a regular guest on NBC’s “Today,” CBS’s “The Talk,” ABC's “The Chew,” NPR’s “All Things Considered” and “The Splendid Table,” and Univision’s “Despierta America.” She has cooked at the White House for President Obama’s Cinco de Mayo and Easter celebrations. This year, the Council of the Americas named Pati one of the “Top 5 Border Ambassadors” who have performed outstanding work bringing the United States and Mexico closer together in their “Americas Quarterly” magazine. She lives in Chevy Chase, Md., with her husband and three sons.

About FRANK.:
FRANK. is a multi-faceted production company that focuses on non-scripted television and digital content. As the creative minds at the helm of FRANK., award-winning producers Dan Connell and Pasquale DeFazio have decades of combined experience in creating and producing a variety of highly acclaimed culinary, travel and lifestyle programming.