Rust Removal for Less: My Cleaning Products Introduces Product for Inexpensive Rust Treatment and Offers Sample of It

My Cleaning Products introduced a new and inexpensive spray for rust removal. It also offered samples of it to prove it's the best rust treatment help anyone could get. 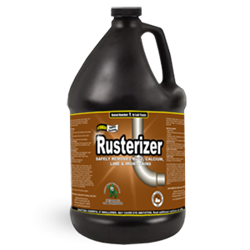 Rusterizer is made safe without compromising its effectiveness. It said that it does not contain chemicals that could harm anyone's health or the environment.

Rust could damage numerous items and surfaces. However, rust removal could salvage and restore them. And wanting to help make that happen with much less expense, My Cleaning Products introduced the use of its organic-based rust removal spray Rusterizer. It also offered samples of it to prove that it truly works.

Moisture is what triggers the formation of rust or corrosion. Even just a little of it could already prompt metal-made items to flake and turn brownish. The fact that it is everywhere everyday makes rust a common occurrence.

However, My Cleaning Products said that just because rust is common doesn't mean that everyone should just let its formation. If left alone, it stated that it could ruin the item it is corroding and cause several problems.

One problem that the company cited is in monetary term. It explained that the corroding wouldn't not stop until all the moisture or iron is consumed. That means it could continue rusting until the surface or item is completely ruined, it said. With that, it elaborated that it could require heavy repair or even replacement, which, consequently, cost money.

Additionally, it said that corrosion could also cause accidents. It detailed that it could loosen the adjacent parts of metal structures, tools and equipments. Those parts, it added, could come apart at any given time and could cause injuries.

Given those, MCP stressed that rust removal is needed and must be done right after the corrosion is sighted. And with Rusterizer, it said that the process could be made prompt, easy, effective and safe. Not to mention, it could be made much less expensive, it added.

As the company explained, Rusterizer is made safe without compromising its effectiveness. It said that it does not contain chemicals that could harm anyone's health or the environment. But though it is formulated with organic ingredients, it assured that it is completely effective.

Being a rust removal spray, it stated that Rusterizer also turns the process into an easy-to-complete rust treatment. That allows anyone to promptly and quickly clear a corrosion, it said.

So, with all its benefits, MCP asserted that Rusterizer is truly the best help anyone could get when it comes to rust treatment. And to prove that true, it announced that it would be giving out Rusterizer Complimentary Samples. As it detailed, they would be available at MyCleaningProducts.com.