Students, Alumni and Faculty to be Honored Friday at SLCC’s Commencement Event

SLCC will hold Commencement in the Maverik Center. 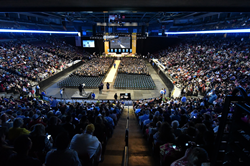 More than 3,200 Salt Lake Community College students will be awarded degrees and certificates at the school’s upcoming Commencement event, scheduled for Friday, May 3, at 9:30 a.m. at the Maverik Center in West Valley City.

During the event, the college will also honor several community leaders, faculty members and students who have been selected as SLCC Graduates of Excellence. Honorees are as follows:

Natalie Kaddas – Kaddas is the CEO of Kaddas Enterprises, a Utah-based plastics manufacturing company. Since 1992, she has taken many classes at SLCC to develop skills to grow her business. Kaddas is also a graduate of the Goldman Sachs 10,000 Small Businesses program, which is offered at the college’s Miller Campus.

Mark Ellis – Ellis is a senior construction manager with Kroger Company and a lieutenant colonel for the U.S. Air Force Reserves. He received an associate’s degree from SLCC before earning a bachelor’s degree in electrical engineering, an MBA and a master’s degree in Military Operational Art and Science.

Officer David Romrell -- South Salt Lake Police Officer David Romrell, who died last year in the line of duty, will be honored posthumously. He was a criminal justice student at SLCC and served several tours of duty with the United States Marine Corps.

Pook Carson – Carson is a business professor who has worked to improve her classes using student feedback and free online educational resources. She has taught at New York University, the University of Utah, Westminster College and Brigham Young University.

J. Chad Erekson – Erekson teaches animation at SLCC and encourages his students to work as a group to develop solutions for complex issues. He is an alumnus of SLCC and holds a bachelor’s of fine arts from Brigham Young University.

Linda Jemmett – Jemmett is an adjunct biology professor. She has taught at the college for 20 years and worked as a medical technologist before coming to SLCC.

Jane Drexler – Drexler has been named as the school’s Distinguished Faculty Lecturer. She is a philosophy professor and won SLCC’s Teaching Excellence Award in 2016.

Seven students will be recognized as SLCC Graduates of Excellence. The award is given to one student from each school at the college and general studies. This is a prestigious distinction that recognizes hard work, commitment and selflessness.

Salt Lake Community College is Utah’s largest two-year institution and educates and trains students at 11 campuses and sites as well as online. The college is Salt Lake County’s principal supplier of applied technology courses and a top 10 college nationally for the number of associate’s degrees awarded. SLCC is also Utah’s leading provider of workforce development programs.