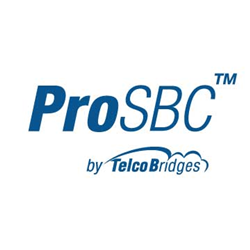 ProSBC is the result of extensive community feedback and it represents a natural evolution of FreeSBC: to date, more than 10 million FreeSBC sessions have been downloaded by customers in 90 countries around the globe.

TelcoBridges, the leading designer and manufacturer of carrier-grade virtual session border controller software and Tmedia VoIP gateways, today announced that it plans to extend its product portfolio with a mid-year release of ProSBC, a feature-rich Virtual Session Border Controller for Service Providers and Enterprises. TelcoBridges also announced today that it is expanding the Beta Program for service providers and enterprises, giving early access to this new offering.

ProSBC features a number of significant enhancements over the existing FreeSBC PRO-edition. It adds encrypted SIP/TLS signaling and SRTP media encryption features. It includes support for the Microsoft Azure cloud, while offering enhanced survivability features and options for permanent licenses. Beyond this initial release, TelcoBridges is planning additional enhancements for ProSBC as part of an ongoing development roadmap, which has been fueled by customer feedback and market demand.

“ProSBC is the result of extensive community feedback and it represents a natural evolution of FreeSBC,” said TelcoBridges’ Senior Director of Product Marketing Alan Percy. “Based on the feedback we’ve already received, we’re confident that ProSBC fulfills the applications and evolving trends faced by service providers and enterprises today – but we continue to welcome additional feedback from companies interested in evaluating this new offering.”

Expected to be generally available in July 2019, ProSBC will be offered as an annual subscription, priced at $1/session/server/year which includes support. Upon release, ProSBC will be available for download at ProSBC.com with a 90-day evaluation license. At any time during the evaluation period, anyone seeking to purchase annual subscription licenses can do so at the TelcoBridges on-line store or by contacting sales(at)telcobridges.com.

Customers using the FreeSBC PRO Edition will be upgraded to ProSBC free of charge.

Those interested in participating in the ProSBC Beta program should complete the application found at: https://www2.telcobridges.com/ProSBCbeta.

The platform-agnostic FreeSBC and ProSBC products are available for download on any combination of VMware™, KVM/OpenStack™, Amazon/AWS™, Microsoft Azure™ and bare metal servers as well as dedicated network devices as part of virtual network function integration. FreeSBC and ProSBC are widely interoperable with major software solutions and carrier networks, finding use cases both in the core and the edge of networks. FreeSBC and ProSBC easily scale, supporting anywhere from 100 to 60,000 sessions per server, with support for 1,100 completed sessions per second (CSPS) and up to 6,000 session attempts per second (SAPS).

About TelcoBridges FreeSBC and ProSBC:
TelcoBridges’ FreeSBC and ProSBC are virtual session border controllers, protecting networks from attack while offering extensive SIP interoperability and routing features with outstanding session handling performance. Both products include a B2BUA, DDOS protection and advanced call routing features. FreeSBC can be licensed to end-users at no cost. ProSBC adds carrier-grade features including high-availability, encryption, and media manipulation capabilities with support and maintenance for a $1/session/year subscription. Both FreeSBC and ProSBC operate on any combination of VMware™, KVM/OpenStack™, Amazon/AWS™, Microsoft Azure™ and bare metal servers as well as a VNF on dedicated network devices. To date, more than 10 million sessions have been downloaded by hundreds of customers in over 90 countries around the globe.