The Union of Agricultural Cooperatives of Kavala Announces Participation in the New Campaign "The Charming Taste of Europe" in the U.S. and Canada

With support from the European Union, the kiwis of Kavala in Greece join “The Charming Taste of Europe” program in promoting the excellence of selected wines and fresh fruits from Italy, France, and Greece 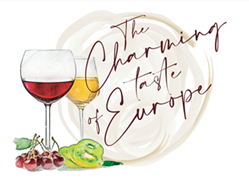 The Union of Agricultural Cooperatives of Kavala (Kavala COOP) from Greece has announced the participation in a new communication campaign in Canada and the U.S. to promote its kiwis and territory in conjunction with other exquisite European products, such as the wines from Abruzzo, Italy, the golden wines from Bordeaux, and the cherries from Rachi Pieria in Greece.

“The Charming Taste of Europe” is a three-year campaign promoted by the Vini d’Abruzzo consortium, the Union of Sweet Bordeaux wines, the Union of Agricultural Cooperatives of Kavala (Kavala COOP), and the Agricultural Cooperative of Rachi Pieria “AGIOS LOUKAS,” co-financed by the European Union. This campaign will focus on raising awareness of these high-quality products in the American and Canadian market.

Kavala, situated on the coast in northern Greece, is not only one of the most beautiful touristic destinations, but also a natural oasis where some of the most delicious fruits and vegetables of Europe are produced following modern and innovative cultivation practices. Thanks to “The Charming Taste of Europe” program, the kiwis of Kavala are now ready to conquer the American and Canadian market with the slogan, “Enjoy it! It’s from Europe.”

Starting in the spring of 2021, these agricultural jewels of Europe will be the protagonists of numerous initiatives and events dedicated to consumers, media, and trade professionals both in the U.S. and Canada to educate these markets about their merits, increase quality standards, and thus enhance their competitiveness and create new export opportunities.

Some of the most important appointments of 2021 include the participation in New York’s Restaurant Week and the Winter Fancy Food Show in San Francisco. Throughout the year, there will be seminars and educational activities with sommeliers, culinary schools, and clubs, together with some dinners dedicated to trade and media.

To learn more about “The Charming Taste of Europe Campaign,” visit charmingtasteofeurope.eu, where it highlights the characteristics of the selected European products. Pages dedicated to “The Charming Taste of Europe” can be found on all main social networks, such as Facebook, Instagram, and YouTube. The Consortia invites everyone to join the social media campaign using the hashtag #charmeu.

About the Union of Agricultural Cooperatives of Kavala (Kavala COOP):
The Union of Agricultural Cooperatives of Kavala (Kavala COOP) was founded in 1927. Today it has 500 members that include producers from the provinces of Kavala, Nestos and Thassos, in northern Greece. The Union has an area of action particularly developed with the cultivation of fruits and vegetables, especially kiwis, asparagus, tomatoes, peppers, watermelons, cherries, and apples. In Greece, the kiwi production is fully complied with the internationally recognized quality standards and protocols, as well as with the specifications of the European legislation, which is characterized worldwide as the strictest in terms of food safety. Kavala cooperatives apply certified quality assurance systems in accordance with the standards and protocols of GLOBAL GAP, GRASP, AGRO 2, IFS, BRC and ISO 22000. The kiwi processing facilities are located in Haidefto (Nestos Kavala), and thanks to specialized agronomists and high sensitivity to the environment, they produce high quality products. For more information, visit http://www.easkavalas.gr/

Activity included into the - "The Charming Taste of Europe", Campaign co-founded by the European Union - Reg. (UE) 1144/2014 - N. 101015721 - REG. 1144/2014_CHARMEU_101015721
The content of this promotion campaign represents the views of the author only and is his/her sole responsibility. The European Commission and the European Research Executive Agency (REA) do not accept any responsibility for any use that may be made of the information it contains.