On June 6, 2018, during the Annual Spring Reception, Festa della Primavera, in New York City, the American Foundation of Savoy Orders awarded the sixth annual Chivalry Award to Matilda Raffa Cuomo, founder of Mentoring USA and former First Lady of the State of New York and wife of the late 52nd Governor The Hon. Mario Cuomo. The Chivalry Award recognized Mrs. Cuomo’s outstanding leadership in educational initiatives such as student mentoring programs and her exemplary lifelong dedication to public service. 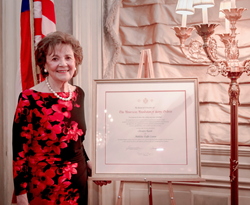 The American Foundation of Savoy Orders, Incorporated awarded the sixth annual Chivalry Award to Matilda Raffa Cuomo in recognition of her outstanding leadership in educational initiatives such as student mentoring, her lifelong dedication to public service and her exemplary conduct and integrity. She is the founder of Mentoring USA and former First Lady of the State of New York and wife of the late 52nd Governor The Hon. Mario Cuomo. She is also the mother of the current New York State Governor Andrew Cuomo.

The Chivalry Award recognizes those who carry forth the humanitarian and hospitaller mission of the centuries-old Savoy Orders. The Chivalry Award is a humanitarian award that celebrates the vision and endeavor of an individual, whose charitable work, public service and exemplary conduct have contributed significantly to the betterment of the community and world. The Award was presented during the Savoy Foundation’s annual spring event - Festa della Primavera - at the Columbus Citizens Foundation on the evening of June 6, 2018, where dignitaries and guests saluted and hailed her achievements. Proceeds benefited Mrs. Cuomo’s designated charity, Mentoring USA. The Chair of the event was Vivian Cardia. The Chivalry Award is conferred annually by the Board of Directors of The American Foundation of Savoy Orders, Incorporated.

Mrs. Cuomo’s leadership role in New York State, across the United States and through international initiatives, has heightened the visibility of such causes as mentoring, children’s rights and volunteerism. In 1987, Mrs. Cuomo established the New York State Mentoring Program, the first statewide school-based, one-to-one mentoring project in the United States. To advance the goals of the New York State program, she founded a non-profit organization, Mentoring USA, in 1995. Mentoring USA believes that the presence of a caring adult in a young person’s life increases self-esteem, strengthens relationships with peers and adults, improves academic performance and attendance, and helps combat school drop-out. The impact of Mrs. Cuomo’s mentoring work has expanded to include affiliate programs in Italy and Spain in Europe, as well as in Morocco in Africa, with plans to increase its presence in other areas of the Mediterranean region.

About the Chivalry Award

The Chivalry Awards were inaugurated by the Savoy Foundation in 2013. The Chivalry Award is a humanitarian award that celebrates the vision and endeavor of an individual, whose humanitarian work, public service and exemplary conduct have contributed significantly to the betterment of the community and world. Its goal is to bring public recognition to individuals whose principles, values, civil conduct and humanitarian accomplishments provide inspiration to future generations. The Chivalry Awards are meant to focus greater attention on standards of knightly conduct, which history associates with Europe in the Middle Ages. Even today, the word “chivalry” is synonymous with courtesy, honor and integrity. Chivalry survives in modern times as both a code of conduct and a way of life, embodying the highest ideals of civilization. Honorees for these awards are selected in recognition of their outstanding service, generosity and civility in their distinguished careers and their unselfish commitment to public causes and personal dignity, which reflect the noble and ancient chivalric traditions of the Dynastic and Hereditary Orders of the Royal House of Savoy. For more information about the Chivalry Awards or prior recipients, please visit http://www.prweb.com/releases/2017/05/prweb14364352.htm and http://www.savoia.org.

The American Foundation of Savoy Orders, Incorporated, a U.S. charitable 501(C) (3) organization, is an NGO in Roster Consultative Status with the Economic and Social Council of the United Nations. It has three endowments: charitable causes, educational programs and an operating fund. Its Savoy Orders Pigott Scholarship was established to provide financial aid to students in the humanities and international studies.

About The American Delegation of Savoy Orders

The American Delegation of Savoy Orders, which includes the United States of America and Canada, is a part of the Dynastic Orders of the Royal House of Savoy, among the oldest orders of chivalry in the world. The Savoy Orders are headquartered in Geneva, Switzerland and have 35 Delegations worldwide that support the ongoing charitable works of these ancient Dynastic Orders of Knighthood and Merit. Their origins and their principles, traditions and humanitarian goals date back a thousand years. HRH Prince Victor Emmanuel, Prince of Naples and Duke of Savoy, is Head of the House of Savoy and Grand Master of the Savoy Orders. His ancestor, King Victor Emmanuel II, united the nation of Italy under his rule between 1861 and 1870 and the Prince’s father, King Umberto II, was Italy’s last reigning sovereign. He died in 1983.